XFS: The ‘Dinger’ wins at the Roval; 4 drivers ousted from playoffs

(NASCAR.com) A.J. Allmendinger prevailed in a hard-fought NASCAR Xfinity Series Playoff race that ended in overtime on the Charlotte Motor Speedway Roval Saturday evening. After a long afternoon negotiating the road course in rainy weather against a field of drivers with championship hopes on the line, the veteran edged 22-year old Noah Gragson by a mere .446-seconds in a rooster-tail run to the checkered flag.

It marked the second win of the season for Allmendinger in the No. 16 Kaulig Racing Chevrolet and his second career win on the Roval.

The Drive for the Cure 250 was the final race in the Round of 12 of the NASCAR Xfinity Series Playoffs with Chase Briscoe, Cindric, Justin Allgaier, Gragson, Justin Haley, Jones, Chastain and Ryan Sieg advancing to the next three-race round of Playoff competition that begins next week at Kansas Speedway.

Jim Harris has been WYSH's News & Sports Director since 2000. In addition to reporting local news, he is the play-by-play voice for Clinton High School football, boys' and girls' basketball and baseball. Catch Jim live weekdays beginning at 6:20 am for live local news, sports, weather and traffic plus the Community Bulletin Board, shenanigans with Ron Meredith and more on the Country Club Morning Show on WYSH & WQLA. Jim lives in Clinton with his wife Kelly and daughter Carolina, his mother-in-law and cats Lucius and Oliver.
Previous Campbell Commissioner passes away
Next NCS: Elliott goes back-to-back at Roval; Busch out of championship contention 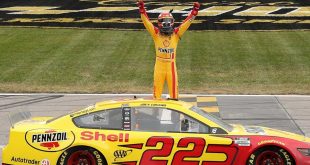 (NASCAR.com) Joey Logano held off Kevin Harvick by a scant .312 seconds in a high-speed …