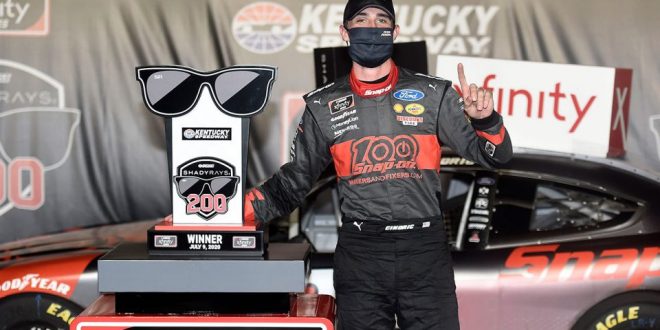 Cindric, who led 41 laps on the night, ultimately finished .952-seconds ahead of rookie Riley Herbst and Ross Chastain to take the victory in Thursday’s Shady Rays 200 – the first of a doubleheader week that will include a second Xfinity Series Kentucky race, the Alsco 300 on Friday night (7:30 pm on WYSH and WQLA).

Noah Gragson, who led a race-best 88 of the 136 laps and for the first time in his career, swept the opening two stage wins, finished 11th. He and JR Motorsports teammate Justin Allgaier were running among the Top-5 on the restart and were poised to challenge for the trophy, but they made contact racing hard on the 1.5-mile high-banked oval and it cost them both better finishes. Allgaier was involved in an accident on the last lap and finished 20th.

For a recap and a look at the how they finished, visit NASCAR.com.

Jim Harris has been WYSH's News & Sports Director since 2000. In addition to reporting local news, he is the play-by-play voice for Clinton High School football, boys' and girls' basketball and baseball. Catch Jim live weekdays beginning at 6:20 am for live local news, sports, weather and traffic plus the Community Bulletin Board, shenanigans with Ron Meredith and more on the Country Club Morning Show on WYSH & WQLA. Jim lives in Clinton with his wife Kelly and daughter Carolina, his mother-in-law and cats Lucius and Oliver.
Previous Ragan announces Arts Grants
Next Campbell schools announce re-opening plan