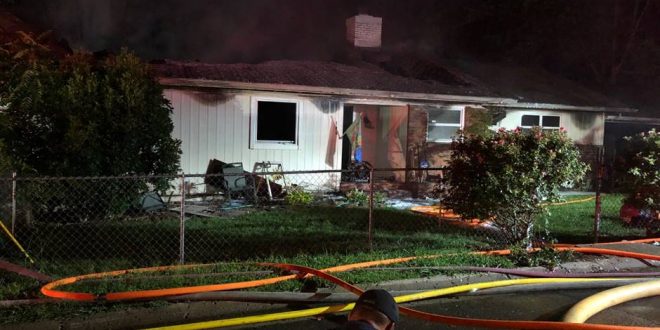 No injuries reported, but house destroyed in early-morning fire

According to the Oak Ridge Fire Department, no one was injured after a fire at a home in the 100 block of East Pasadena Road early this (Monday, July 27th) morning.

Crews responded to a report of a structure fire at the home around 3:16 am Monday, and when they arrived, reported finding the home 25% involved, with fire coming through the roof in the back corner.

Three engines, a tower truck, rescue truck, and Battalion Chief fought the fire for approximately 20 minutes before gaining control. The Oak Ridge Electric Department responded to disconnect the power at the pole and Oak Ridge Police provided security on the scene.

Crews were on the scene for several hours watching to make sure the fire did not rekindle and to begin their investigation.

The cause is currently under investigation. The house and contents are considered a total loss.

Jim Harris has been WYSH's News & Sports Director since 2000. In addition to reporting local news, he is the play-by-play voice for Clinton High School football, boys' and girls' basketball and baseball. Catch Jim live weekdays beginning at 6:30 am for live local news, sports, weather and traffic plus the Community Bulletin Board, shenanigans with Ron Meredith and more on the Country Club Morning Show on WYSH. Jim lives in Clinton with his wife Kelly and daughter Carolina, and cats Oliver, Bow and Libby.
Previous TBI releases identity of man found dead
Next Need a job? Clinton is hiring