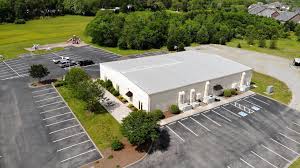 The community is invited to attend an open house at the future home of the Anderson County Senior Center on Tuesday, July 7th at 5:30 pm to view proposed plans for improvements to the property at 96 Mariner Point Drive in Clinton that is soon to become the new home of the Senior Center and the county’s Office on Aging.

According to County Mayor Terry Frank’s office, Anderson County engaged the services of architect Stacy Cox of Studio Four Design to assist in interior improvements, as well as some recommended updates to the exterior.  The community is invited to view the proposed exterior improvements and provide input for his/her preferences, according to the release.

The County Commission agreed to purchase the former Faith Promise Church building for $500,000 earlier this year, ending a nearly three-year-long search for a suitable facility.

“As the senior center is at the entrance of a large residential neighborhood, and is also visible from Charles G. Seivers Boulevard, we wanted to do more than just move in. We hope we can bring added value to the community. We have worked with Mr. Cox and his team at Studio Four Design to present some ideas for some visual improvements to the building, but also concept ideas that would add value to the community in terms of shared use,” said Mayor Frank, adding “As the new center will be located inside the city limits of Clinton, we also want to make sure to work closely with Mayor Scott Burton and the City of Clinton.  Mayor Burton has been a valuable partner in setting up the open house in order to engage the community.”

“Senior Centers are one of the most important resources for our aging community,” Clinton Mayor Scott Burton said in the release.

“Today’s senior centers have more to offer than you think. They promote healthy living through many programs available to help stay active and independent,” Burton said. “Senior Centers also serve as gathering places for our aging population to connect with their peers as well as places for them to participate in various activities and to receive a daily meal. As mayor of Clinton I am excited that our County Government was able to provide this Senior Center in our City and for the citizens of Anderson County, and I look forward to viewing the proposed improvements to the facility.”

Light refreshments will be available. For more information about the Anderson County Senior Center and Office on Aging programs, contact Director Cherie Phillips at (865) 457-3259.

Jim Harris has been WYSH's News & Sports Director since 2000. In addition to reporting local news, he is the play-by-play voice for Clinton High School football, boys' and girls' basketball and baseball. Catch Jim live weekdays beginning at 6:20 am for live local news, sports, weather and traffic plus the Community Bulletin Board, shenanigans with Ron Meredith and more on the Country Club Morning Show on WYSH & WQLA. Jim lives in Clinton with his wife Kelly and daughter Carolina, his mother-in-law and cats Lucius and Oliver.
Previous TSSAA lays out options for football following Wednesday Board of Control meeting
Next Warrant served following drug innvestigation