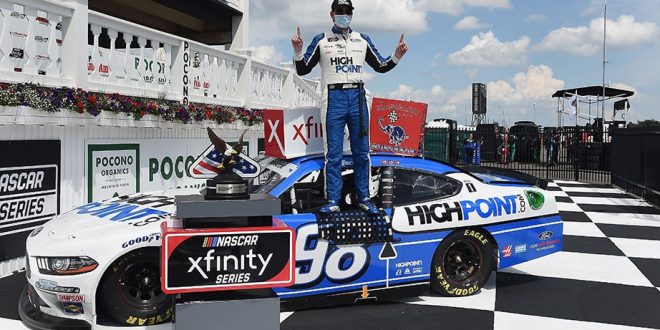 (NASCAR) Chase Briscoe recovered from a pit road speeding penalty and a spin with 21 laps left to pick up his fourth NASCAR Xfinity Series victory of the season in Sunday’s Pocono Green 225.

In a race that went to overtime after a record ninth caution at 2.5-mile Pocono Raceway, Briscoe surrendered the lead to Ross Chastain in Turn 1 after the final restart but reclaimed the top spot in the Tunnel Turn and finished 1.015 seconds ahead of the No. 10 Chevrolet a lap-and-a-half later.

The victory, Briscoe’s first at Pocono and the sixth of his Xfinity Series career, left the driver of the No. 98 Stewart-Haas Racing Ford halfway to his stated goal of at least eight wins this season.

In the final Xfinity Dash 4 Cash event, runner-up Chastain claimed the $100,000 bonus as the highest finisher among four eligible drivers for the second straight week — and the third straight for his team, Kaulig Racing.

Briscoe regained the series lead by three points over Gragson, who finished 22nd, one lap down.

For more on Sunday’s race, follow this link to NASCAR.com.

Jim Harris has been WYSH's News & Sports Director since 2000. In addition to reporting local news, he is the play-by-play voice for Clinton High School football, boys' and girls' basketball and baseball. Catch Jim live weekdays beginning at 6:20 am for live local news, sports, weather and traffic plus the Community Bulletin Board, shenanigans with Ron Meredith and more on the Country Club Morning Show on WYSH & WQLA. Jim lives in Clinton with his wife Kelly and daughter Carolina, his mother-in-law and cats Lucius and Oliver.
Previous GROTS: Jones wins for first time in Truck Series
Next NCS #2: Hamlin follows up runner-up finish Saturday with Pocono win #6 on Sunday