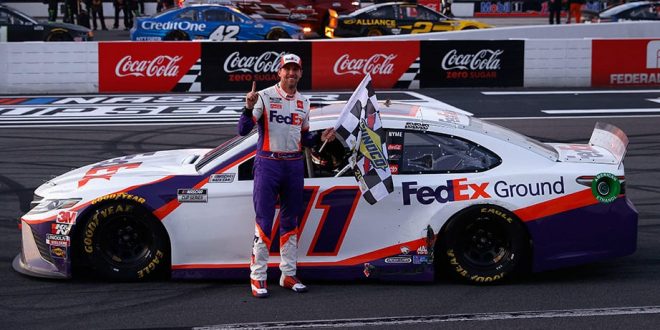 (NASCAR) For the first time in its history, NASCAR ran two Cup Series events on the same weekend at the same track.

Hamlin achieved several milestones with the win. He picked up his sixth victory at the 2.5-mile triangular track, tying NASCAR Hall of Famer Jeff Gordon for most all-time. The triumph was the 41st of Hamlin’s career, 19th most in NASCAR history, breaking a tie with another NASCAR Hall of Famer, Mark Martin.

And a day after Harvick tied Hamlin for a series-best three wins this season, Hamlin broke the deadlock with his fourth victory of the year.

For more on Sunday’s race, follow this link to NASCAR.com.

Jim Harris has been WYSH's News & Sports Director since 2000. In addition to reporting local news, he is the play-by-play voice for Clinton High School football, boys' and girls' basketball and baseball. Catch Jim live weekdays beginning at 6:20 am for live local news, sports, weather and traffic plus the Community Bulletin Board, shenanigans with Ron Meredith and more on the Country Club Morning Show on WYSH & WQLA. Jim lives in Clinton with his wife Kelly and daughter Carolina, his mother-in-law and cats Lucius and Oliver.
Previous XFS: Briscoe halfway to goal of eight wins
Next Clinton Council meets Monday