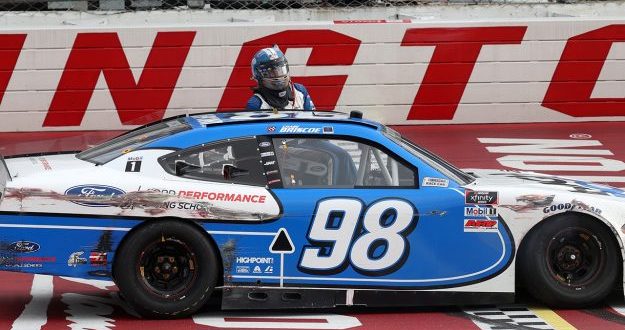 (MRN) With the beating and the banging in the final 10 laps that probably had the fans at home on their feet, an emotional Chase Briscoe battled Kyle Busch to the line to capture the win in the Toyota 200 at Darlington Raceway in the NASCAR Xfinity Series’ first race back since the COVID-19 pandemic brought sports to a halt.

The win was made all the more poignant for Briscoe by the personal emotions of the week, as he and his wife, Marissa, had shared on Wednesday they had learned the day before they lost the baby they were expecting to welcome late in the year.

“This is for my wife. This has been the hardest week I’ve ever had to deal with,” Briscoe said shortly after climbing out of the car with tears running down his face. “When I took the lead, I was crying in my car. This is more than a race win. This is the biggest win of my life after the toughest day of my life. To be able to beat the best there is, is so satisfying.”

For Briscoe, it was also the second win of the season after he took the victory earlier this year at Las Vegas. He is the lone multi-race Xfinity Series winner thus far in 2020.

It was the first race for the Xfinity Series since the checkered flag flew in Phoenix, Arizona, on March 7, as the COVID-19 pandemic shut down the sporting world a few days after. And the race was further delayed by weather this week – initially the event was set for Tuesday evening but was rained out and pushed out two days, and then as continued precipitation fell it bumped a Thursday noon start by four and a half hours.

For a complete wrap-up of Thursday’s action, click here.

Jim Harris has been WYSH's News & Sports Director since 2000. In addition to reporting local news, he is the play-by-play voice for Clinton High School football, boys' and girls' basketball and baseball. Catch Jim live weekdays beginning at 6:20 am for live local news, sports, weather and traffic plus the Community Bulletin Board, shenanigans with Ron Meredith and more on the Country Club Morning Show on WYSH & WQLA. Jim lives in Clinton with his wife Kelly and daughter Carolina, his mother-in-law and cats Lucius and Oliver.
Previous Arnold David Hembree, “Shorty,” age 79 of Vasper
Next City of Oak Ridge Outdoor Pool opening June 15 with COVID-19 changes