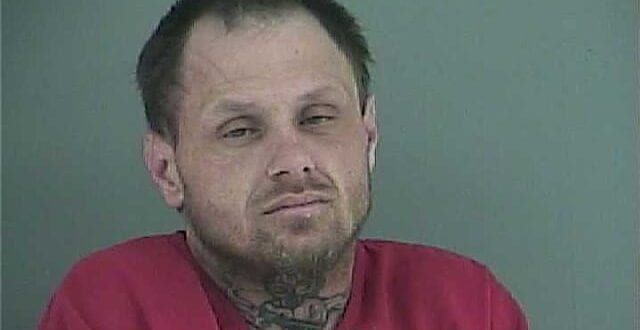 Following up on a story we told you about on Monday, we now have more details regarding an incident in which an Anderson County Sherriff’s Department K9 played a critical role in apprehending a wanted fugitive.

Shortly after 9 pm Saturday, Deputy James Presson reported that he was working a special traffic enforcement assignment and was looking for a stolen white Hyundai Elantra being driven by 40-year-old Derrick Farmer, who was wanted by federal authorities as well. While cruising through Rocky Top, Presson reported that he spotted vehicle at the intersection of Main and Creek Streets. He pulled behind the car and ran the plates through Dispatch, which came back to a different vehicle. The deputy activated his lights and siren to pull the car over, but Farmer accelerated away at a high rate of speed, leading Presson on a high-speed chase through the winding streets of a residential area. Presson reported that the fleeing car reached speeds in excess of 100 miles an hour and that the driver was traveling in both lanes, flying around blind curves and posing a “substantial risk of death or bodily injury to any citizen on the road” as well as to his passenger, a wanted female identified as 29-year-old Autumn Love.

Presson and several other deputies, including Adam Warren and his K9 partner Axel, responded to the scene and found the car, with Love still inside. She was taken into custody on an outstanding warrant.

Meanwhile, Warren and Axel tracked Farmer’s route into the woods, where he had fled on foot. When they reached the top of the ridge, Farmer was spotted running away and when Warren told him to stop, he instead climbed a small tree. After being threatened with a dog bite, Farmer finally came out of the tree and was taken into custody.

Love told officers that she had been scared when she realized how fast the pair had been going.

After confirming that they were the only two people in the car, which they had apparently been living out of over the past few weeks, both Farmer and Love were taken into custody.

Farmer was booked on felony charges of evading arrest, reckless endangerment and theft as well as misdemeanor charges of driving on a suspended license and reckless driving. He is being held at the Anderson County Jail for US Marshals on a federal probation violation.

Love, as of this morning, remained in custody on the warrant.

The car had been reported stolen from a location in Clinton, but efforts to contact the owner were initially unsuccessful. The vehicle was towed to Quality Towing’s lot in Oak Ridge.

Jim Harris has been WYSH's News & Sports Director since 2000. In addition to reporting local news, he is the play-by-play voice for Clinton High School football, boys' and girls' basketball and baseball. Catch Jim live weekdays beginning at 6:30 am for live local news, sports, weather and traffic plus the Community Bulletin Board, shenanigans with Ron Meredith and more on the Country Club Morning Show on WYSH & WQLA. Jim lives in Clinton with his wife Kelly and daughter Carolina, and cats Oliver, Bow and Libby.
Previous CHS Baseball to host ‘Terry Benjamin Night’ March 16th
Next Breastfeeding support group to meet March 19