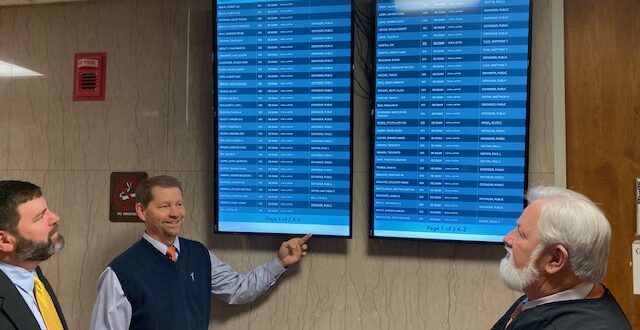 Anderson County Circuit Court Clerk Rex Lynch has announced the installation of an “Electronic Docket System” for Circuit, Criminal and General Sessions Courts. This system is expected to enhance transparency while providing information to all those involved in the legal system.

Displaying case information, lawyer, judge, and scheduled time of court hearing, tells visitors exactly when and where to be, which reduces anxiety and agitation, according to an announcement from the office.

This system is part of an ongoing modernization of the Clerk’s office, during which officials have created Judicial Commissioners and reallocated court files in effort to have a more effective and efficient office, which should reduce the cost to the taxpayers while also streamlining the court process.

Jim Harris has been WYSH's News & Sports Director since 2000. In addition to reporting local news, he is the play-by-play voice for Clinton High School football, boys' and girls' basketball and baseball. Catch Jim live weekdays beginning at 6:20 am for live local news, sports, weather and traffic plus the Community Bulletin Board, shenanigans with Ron Meredith and more on the Country Club Morning Show on WYSH & WQLA. Jim lives in Clinton with his wife Kelly and daughter Carolina, his mother-in-law and cats Lucius and Oliver.
Previous LaFollette Christmas Parade Saturday
Next ASAP, partners hosting substance-free movie night