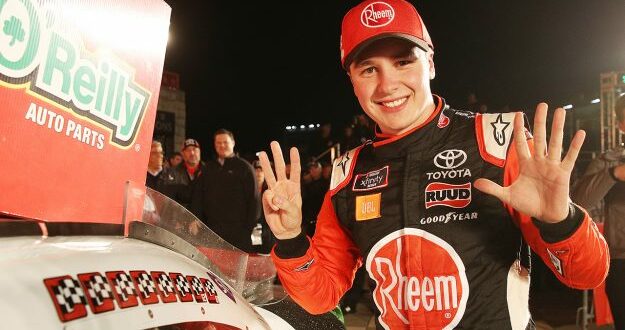 (MRN) Christopher Bell scored his eighth win of the NASCAR Xfinity Series season in Saturday night’s O’Reilly Auto Parts 300 at Texas Motor Speedway to lock himself into the Championship 4.

Bell now sets his sights on the title race in two weeks at Homestead-Miami Speedway after leading 101 laps and winning both stages for his 16th career win.

“I can’t wait to get to Phoenix. I love that race track and now I get to focus on one thing, and that is winning the race. I don’t know if Jason (Ratcliff, crew chief) was thinking points tonight, but we are definitely not going to have to think points next week.”

Bell’s eight wins are his most in a single season and his career victory total through 72 starts is tied for the most with Sam Ard and Jack Ingram.

Ross Chastain led 29 laps and finished second for his second top five, and fifth top 10, in his 19th start this season.

Austin Cindric finished third and has now placed in the top-three in four of the five playoff races.

Brandon Jones, who won the last race at Kansas, was fourth with John Hunter Nemechek rounding out the top five.

For much more, visit www.mrn.com.

Jim Harris has been WYSH's News & Sports Director since 2000. In addition to reporting local news, he is the play-by-play voice for Clinton High School football, boys' and girls' basketball and baseball. Catch Jim live weekdays beginning at 6:20 am for live local news, sports, weather and traffic plus the Community Bulletin Board, shenanigans with Ron Meredith and more on the Country Club Morning Show on WYSH & WQLA. Jim lives in Clinton with his wife Kelly and daughter Carolina, his mother-in-law and cats Lucius and Oliver.
Previous ACSD: Woman disrupts church service, gets tased
Next MECS: Harvick wins 3rd straight Texas fall race, moves on to Championship 4