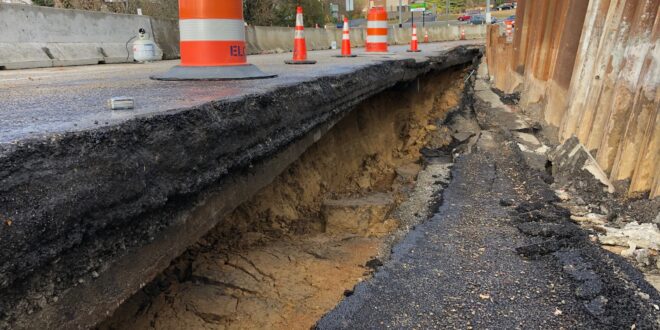 According to the city of Clinton’s TDOT project liaison Lynn Murphy says that workers from contractor Blalock Construction are continuing to perform work to stabilize a large void that appeared beneath the northbound lanes of Clinch Avenue on the northern end of the Lewallen Bridge replacement project during heavy rains this past Saturday. The collapse of that part of the roadway has brought traffic across the bridge down to one lane in each direction, causing back-ups and delays during the busiest times of the day. The work has also forced the closure one of the left turn lanes from westbound Seivers onto Clinch, as well as one of the southbound lanes of South Main Street approaching Clinch.

Crews are building a sub-grade steel structure by driving beams into the ground, and then welding braces. Once this is complete, the void will be filled, and at least one additional traffic lane may be re-established.

Murphy said in his announcement Wednesday morning that a timeframe for the completion of the emergency repair is not known, but that “an update will be released as soon as we have more information.”

Jim Harris has been WYSH's News & Sports Director since 2000. In addition to reporting local news, he is the play-by-play voice for Clinton High School football, boys' and girls' basketball and baseball. Catch Jim live weekdays beginning at 6:20 am for live local news, sports, weather and traffic plus the Community Bulletin Board, shenanigans with Ron Meredith and more on the Country Club Morning Show on WYSH & WQLA. Jim lives in Clinton with his wife Kelly and daughter Carolina, his mother-in-law and cats Lucius and Oliver.
Previous CPD officer honored for meritorious conduct
Next Woman charged with attempted murder in Oak Ridge stabbing