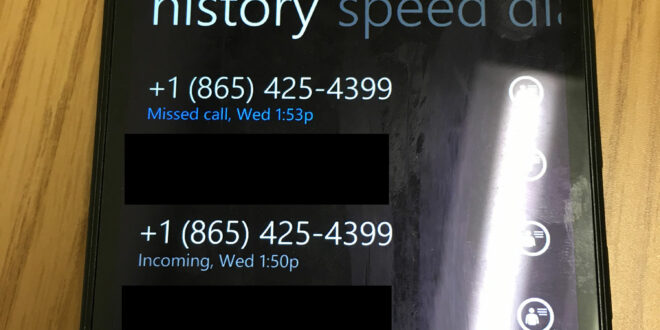 Wednesday, the Oak Ridge Police Department issued a warning for citizens to be on the lookout for “spoofed” phone calls that appear to be coming from the police department but are actually from scam artists.

In an announcement to local media, the ORPD says that at least two recent reports have been made regarding these “spoofed” calls. One person was contacted by a scammer claiming to be an investigator with ORPD. The scammer provided a bogus name and badge number and said they needed to verify personal information as part of an investigation, including asking for the person’s name, address, and part or all of their Social Security number. In that instance, the scammer disconnected the call and called back from what appeared to be the police department’s non-emergency line, (865) 425-4399.

The announcement also states that another individual contacted the police department to ask why they were being called repeatedly by ORPD. The phone number showed up as the Oak Ridge Police Department on their caller ID system, but a check of phone records indicated that no calls to this person had been made from ORPD.

Caller ID “spoofing” is technology that causes the telephone network to indicate that a call is coming from somewhere other than the true location. In other words, the software allows the caller to program the caller ID to show any message or title.

The Oak Ridge Police Department would like to remind everyone that calls like this are not legitimate, even if they appear to come from ORPD. The department will never contact you by phone about outstanding warrants or to ask for money or personal/financial information. Please do not provide information over the phone to anyone you don’t know, especially if you did not make the call yourself. If you answer a call like the one described above, hang up immediately.

If you believe you or someone you know has been a victim of a scam phone call, please contact the Oak Ridge Police Department at (865) 425-4399. Additional questions can be directed to the department’s main phone line at (865) 425-3504.

Jim Harris has been WYSH's News & Sports Director since 2000. In addition to reporting local news, he is the play-by-play voice for Clinton High School football, boys' and girls' basketball and baseball. Catch Jim live weekdays beginning at 6:20 am for live local news, sports, weather and traffic plus the Community Bulletin Board, shenanigans with Ron Meredith and more on the Country Club Morning Show on WYSH & WQLA. Jim lives in Clinton with his wife Kelly and daughter Carolina, his mother-in-law and cats Lucius and Oliver.
Previous Ernest (Ernie) R. Austin, age 81, of Kingston
Next Harriman Library offering computer classes