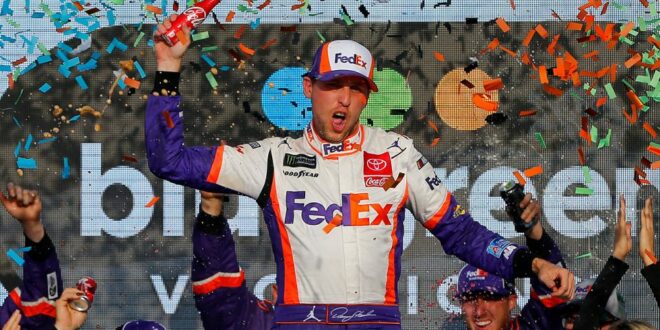 (MRN) Denny Hamlin delivered in a big way on Sunday when he scored the win in the Bluegreen Vacations 500 at ISM Raceway to advance to the Championship 4.

Hamlin came into the race 20 points below the cutline on the Playoff grid. But he was able to persevere a late race restart to score his sixth win of the season and secure a spot in next week’s title race at Homestead-Miami Speedway.

“I said I’m going to give it everything I’ve got to make up for that mistake last week…I’ve been through so many playoffs and done them wrong,” Hamlin said. “This year, I’m always been waiting on the next right thing to happen.”

Hamlin led four times for 143 laps, including the final 62.

Hamlin joins Martin Truex Jr., Kevin Harvick and Kyle Busch is next week’s Ford EcoBoost 400 as part of the Championship 4 and a chance to win this year’s Monster Energy NASCAR Cup Series title.

The season comes to a close next Sunday at Homestead-Miami Speedway.

Jim Harris has been WYSH's News & Sports Director since 2000. In addition to reporting local news, he is the play-by-play voice for Clinton High School football, boys' and girls' basketball and baseball. Catch Jim live weekdays beginning at 6:20 am for live local news, sports, weather and traffic plus the Community Bulletin Board, shenanigans with Ron Meredith and more on the Country Club Morning Show on WYSH & WQLA. Jim lives in Clinton with his wife Kelly and daughter Carolina, his mother-in-law and cats Lucius and Oliver.
Previous XFS: Allgaier snaps long winless streak, qualifies for Championship 4
Next HSFB: AC, OR, OS, Powell, Kingston, Coalfield survive Round 1, advance to Round 2