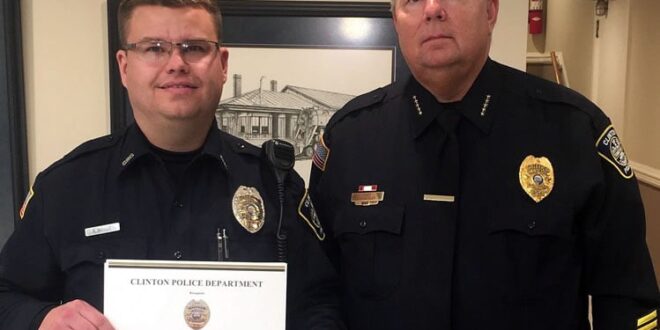 Clinton Police Officer Kris Miville was recently awarded a special Meritorious Conduct Medal.  Police Chief Vaughn Becker presented a certificate and uniform medal during Monday’s meeting of the City Council.  Chief Becker said in a press release posted to the department’s Facebook page, that, “I wanted to recognize Kris for his bravery and unselfish acts.”
On October 11th, Officer Miville was off-duty and visiting a park in Knoxville with his family. His attention was drawn to a disturbance between two men nearby, which turned violent when one of the men pulled a knife and began stabbing the other man. Officer Miville quickly responded, identifying himself as a police officer. He was able to disarm the suspect and began first aid on the victim.

The victim was described as being in very serious condition and had suffered life-threatening injuries. Because he received aid in a timely manner, though, he is expected to recover.

The suspect was arrested at the scene and charged by Knoxville Police with attempted murder.

Jim Harris has been WYSH's News & Sports Director since 2000. In addition to reporting local news, he is the play-by-play voice for Clinton High School football, boys' and girls' basketball and baseball. Catch Jim live weekdays beginning at 6:20 am for live local news, sports, weather and traffic plus the Community Bulletin Board, shenanigans with Ron Meredith and more on the Country Club Morning Show on WYSH & WQLA. Jim lives in Clinton with his wife Kelly and daughter Carolina, his mother-in-law and cats Lucius and Oliver.
Previous OR Community Band announces Christmas Concert
Next Repairs continue at bridge replacement site