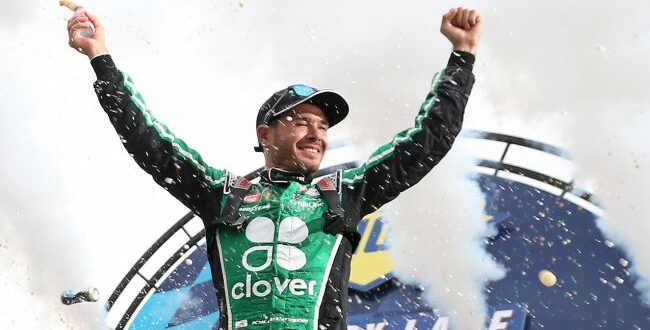 (MRN) Kyle Larson ended a 75-race winless streak when he took the checkered flag in Sunday’s Drydene 400 at Dover International Speedway to advance to the Round of 8 in the Monster Energy NASCAR Cup Series Playoffs.

“That’s as good as I’ve ever been around cutting the bottom here,” Larson said. “Just a great combination here. Good to be fast in practice and then be good again in the race and get the win.”

The Chip Ganassi Racing driver last won a Cup Series race at Richmond in September of 2017. He was able to out-distance Martin Truex Jr. Sunday to finally get back to Victory Lane.

“Just awesome to get a win and not have to worry about Talladega next week,” Larson said. “I don’t like that place. It’s pretty neat to do what we did today, pit crew did a great job to get us out first and give us control of the race.”

There were only eight cars on the lead lap in a race that had three cautions with two for stage breaks.

Jim Harris has been WYSH's News & Sports Director since 2000. In addition to reporting local news, he is the play-by-play voice for Clinton High School football, boys' and girls' basketball and baseball. Catch Jim live weekdays beginning at 6:20 am for live local news, sports, weather and traffic plus the Community Bulletin Board, shenanigans with Ron Meredith and more on the Country Club Morning Show on WYSH & WQLA. Jim lives in Clinton with his wife Kelly and daughter Carolina, his mother-in-law and cats Lucius and Oliver.
Previous XFS: Custer wins for 7th time this season; four eliminated from playoffs
Next Shorthanded Dragons run into West buzzsaw