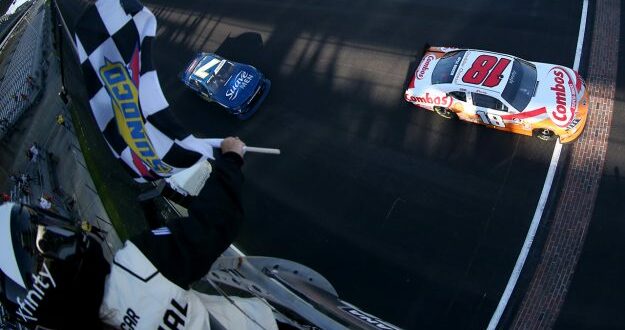 Busch held off defending race winner Justin Allgaier to the checkered flag for his fourth win of the season in his seventh start. He started from the pole and led a race-high 46 laps, inclduing the final eight.

“The 7 (Allgaier) was really good,” Busch said. “He was really smart and played a great race. We were just faster and fast enough there at the end in order to make sure that we stayed in front of those guys.

“It’s pretty cool to win here in Indy any time. We’ll take it.”

“Hopefully we can go five-for-five and we can make it 101 and hang up our hat,” Busch said.

The final run to the finish when Busch took the lead on a restart came after a red flag was displayed with eight laps to go when Christopher Bell and Tyler Reddick got together while racing for the lead in Turn 2.

“I don’t exactly know what happened, but I just know both of us had the throttles buried going off into two and I just slid up on the inside of him,” Bell said.

“It was the end of the race and we were going for it,” Reddick said. “Nothing against Christopher, he did nothing wrong. His car just got loose and it’s just part of racing.”

“Kyle’s great on restarts, especially on late race restarts,” Allgaier said. “That’s what sets him apart here in the Xfinity Series and in the Cup Series. Hats off to our guys our Suave Men Camaro was on rails especially on the long run, we were really able to push those guys.”

“It was frustrating out there for sure,” Custer said. “Our Ford Mustang was really fast, especially on the long runs. We just couldn’t get it to go on the restarts. Every single time it seemed like something would go wrong in front of us and we would get stacked up.”

Reddick now leads the point standings by 50 points over Bell.

Jim Harris has been WYSH's News & Sports Director since 2000. In addition to reporting local news, he is the play-by-play voice for Clinton High School football, boys' and girls' basketball and baseball. Catch Jim live weekdays beginning at 6:20 am for live local news, sports, weather and traffic plus the Community Bulletin Board, shenanigans with Ron Meredith and more on the Country Club Morning Show on WYSH & WQLA. Jim lives in Clinton with his wife Kelly and daughter Carolina, his mother-in-law and cats Lucius and Oliver.
Previous Fire destroys Campbell apartments
Next MECS: Harvick wins; regular season over; Newman, Bowyer make playoffs; Johnson does not