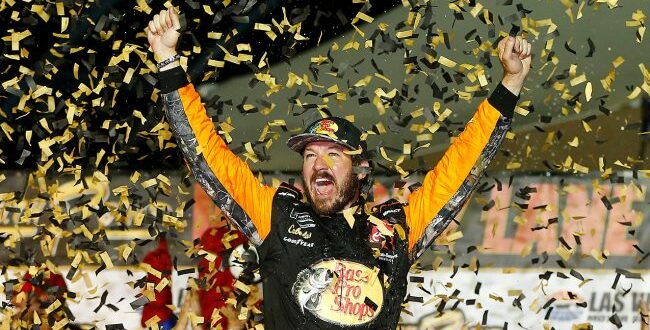 The 2017 champion passed Kevin Harvick on Lap 248 to score his fifth win of the season and in the process will advance to the next round of the playoffs.

“It was a lot of fun tonight,” Truex Jr. said. “Any time you get a car like that it’s a lot of fun. It wasn’t easy, we had our challenges.

“These next two weeks are all about bonus points. This is big today to get six. Those are really important to get to Homestead.”

Truex Jr. has won the opening race of the playoffs three of the last four seasons.

“We hit it right when we needed to at the end and beat the 4 car,” he said. “Really, that whole second to last run I was just babying it to save the right rear, then we started being faster than him and Cole got the car perfect that last run.”

“If we didn’t have a wrecked car we would have had a shot at winning,” Logano said. “We were really good at the beginning of the race. We drove all the way to the lead and led a bunch of laps. We can be proud of that. We won’t let our heads get down on this. It is still a strong day.”

Logano and Truex Jr. won the first two stages of the race.

Jim Harris has been WYSH's News & Sports Director since 2000. In addition to reporting local news, he is the play-by-play voice for Clinton High School football, boys' and girls' basketball and baseball. Catch Jim live weekdays beginning at 6:20 am for live local news, sports, weather and traffic plus the Community Bulletin Board, shenanigans with Ron Meredith and more on the Country Club Morning Show on WYSH & WQLA. Jim lives in Clinton with his wife Kelly and daughter Carolina, his mother-in-law and cats Lucius and Oliver.
Previous XFS: Reddick wins regular-season finale, playoff field set
Next Dragons fall to 0-4 with loss at 2A power Meigs County