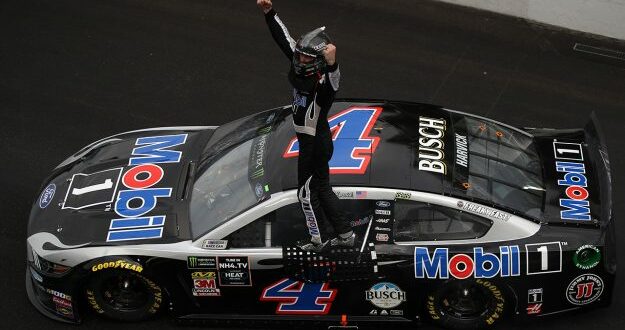 (MRN) Kevin Harvick captured his second win in the Big Machine Vodka 400 at The Brickyard on Sunday after leading 118 laps from the pole.

Harvick last won in 2003 and added to his Indianapolis Motor Speedway legacy with another win. He has won three of the last seven Monster Energy NASCAR Cup Series races.

“This is great, just got to say thanks to all the fans,” Harvick said. “Can’t tell you how much coming to Indianapolis (meant) to me as a kid. I watched Rick Mears win Indy 500’s and got to be around him as a kid and he was my hero. So coming here and winning here is pretty awesome.”

“We were the second-best car of those who were still running,” Logano said. “We needed a solid day, it was nice to be able to finish where we should and have a shot to win. I was hoping for a green-white-checkered I saved my tires but it was just too far.”

The Monster Energy NASCAR Cup Series begins the Playoffs next week with the South Point 400 at Las Vegas Motor Speedway.

Bowyer finished fifth while Newman came home eighth as both veteran drivers qualified for the post-season.

Johnson came into Sunday’s Big Machine Vodka 400 at the Brickyard 18 points out of the final spot in the playoff race. He was battling for position on a lap 105 restart when his Hendrick Motorsports teammate William Byron made contact with Johnson’s car sending him on a spin up into the outside wall. Before it was over eight other drivers were in some way involved in the multi-car crash and Johnson’s car was too severely damaged to continue.

It marks the first time since the Playoff format was introduced in 2004 that Johnson will not have an opportunity to run for the championship.

Jim Harris has been WYSH's News & Sports Director since 2000. In addition to reporting local news, he is the play-by-play voice for Clinton High School football, boys' and girls' basketball and baseball. Catch Jim live weekdays beginning at 6:20 am for live local news, sports, weather and traffic plus the Community Bulletin Board, shenanigans with Ron Meredith and more on the Country Club Morning Show on WYSH & WQLA. Jim lives in Clinton with his wife Kelly and daughter Carolina, his mother-in-law and cats Lucius and Oliver.
Previous XFS: Busch wins at Indy
Next Leroy Jobe, age 78 of Lake City