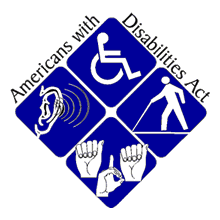 (City of Oak Ridge press release) The City of Oak Ridge is requesting feedback from the community as part of the Public Works Department’s ADA (Americans with Disabilities Act) Transition Plan. The survey asks for information about experiences accessing City facilities, parks, or programs and is available now.

The transition plan will provide the City with a set of guidelines for how to improve facilities, sidewalks, parking lots, and parks as well as signalize intersections. It will also include an annual budget for these improvements and prioritize which areas should be addressed first.

The first portion of the project included evaluating all City-owned facilities along with sidewalks and signalized intersections that fall inside the right-of-way. Those tasks have already been completed.

The next step is to create a transition plan that will correct or suggest improvements and prioritize the necessary work. As part of this phase, the City is asking citizens for their input to assist staff in the planning portion.

The ADA Survey is currently available under the “Featured Projects” section of the City’s website or through the following direct link: bit.ly/OakRidgeADA.

Questions about the ADA Transition Plan or the online survey can be directed to the Public Works Department at (865) 425-1875 or by emailing [email protected].

Jim Harris has been WYSH's News & Sports Director since 2000. In addition to reporting local news, he is the play-by-play voice for Clinton High School football, boys' and girls' basketball and baseball. Catch Jim live weekdays beginning at 6:20 am for live local news, sports, weather and traffic plus the Community Bulletin Board, shenanigans with Ron Meredith and more on the Country Club Morning Show on WYSH & WQLA. Jim lives in Clinton with his wife Kelly and daughter Carolina, his mother-in-law and cats Lucius and Oliver.
Previous Smokies to host Fantasy Football draft parties
Next Blankenship Field, track open for public use