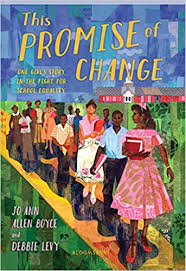 JoAnn Allen Boyce, one of the members of the Clinton 12, will be in Clinton on Friday signing copies of her award-winning new book.

Ms. Boyce will be signing copies of “This Promise of Change” at the Green McAdoo Cultural Center and Museum at 101 School Street in Clinton on Friday from 5 to 7 pm. Copies of the book will also be sold during the event.

“This Promise of Change” was published earlier this year and has already been named the Best Young Adult Fiction of 2019 by the Boston Globe, and recently was recognized with an East Tennessee Historical Society Award of Distinction. The book is technically non-fiction, as it retells actual events, but is written in verse, setting it apart from other stories of a similar nature.

Here is how the book is summarized by its publishers:

“In 1956, one year before federal troops escorted the Little Rock 9 into Central High School, fourteen year old Jo Ann Allen was one of twelve African-American students who broke the color barrier and integrated Clinton High School in Tennessee.

At first things went smoothly for the Clinton 12, but then outside agitators interfered, pitting the townspeople against one another. Uneasiness turned into anger, and even the Clinton Twelve themselves wondered if the easier thing to do would be to go back to their old school.

Jo Ann–clear-eyed, practical, tolerant, and popular among both black and white students—found herself called on as the spokesperson of the group. But what about just being a regular teen? This is the heartbreaking and relatable story of her four months thrust into the national spotlight and as a trailblazer in history. Based on original research and interviews and featuring backmatter with archival materials and notes from the authors on the co-writing process.”

Jim Harris has been WYSH's News & Sports Director since 2000. In addition to reporting local news, he is the play-by-play voice for Clinton High School football, boys' and girls' basketball and baseball. Catch Jim live weekdays beginning at 6:20 am for live local news, sports, weather and traffic plus the Community Bulletin Board, shenanigans with Ron Meredith and more on the Country Club Morning Show on WYSH & WQLA. Jim lives in Clinton with his wife Kelly and daughter Carolina, his mother-in-law and cats Lucius and Oliver.
Previous Betty Ann Poole, age 83, of Harriman
Next CCHS football coach’s infant son receives support from entire community