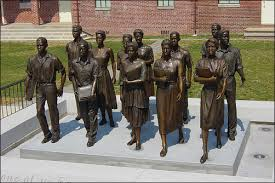 On Monday, August 26th, the eight surviving members of the Clinton 12, the 12 black students who desegregated Clinton High School in 1956, will once again make the trip down Foley Hill to commemorate their initial walk into history. Family members of the deceased members of that historic group will also be part of the event, which is set to begin at 10 am.

These 12 students became the first African-Americans to integrate a previously all-white Southern public high school following the 1954 Supreme Court decision striking down desegregation in the Brown v. Board of Education case. The surviving members of that special group will walk, or drive, down the hill, following the same route they took to walk to school each day from the former Green McAdoo School–now a museum dedicated to preserving their remarkable story–to the what is now Clinton Middle School, the original site of Clinton High, on the 26th.

This time around, however, the route will be lined not with people upset at their presence, but by students from both Clinton Middle and Elementary Schools, who will be cheering them and thanking them for their contributions to not only local history, but American history. Following the walk, there will be a special program at the middle school, where the Clinton 12 will be celebrated and receive proclamations from the state and county as well as from city leaders in both Clinton and Oak Ridge. US Senator Lamar Alexander is expected to be among the dignitaries present during the celebration.

What you need to Know (from event Facebook invitation, Adventure Anderson):
-Parking is at the Clinton Community Center and the public can stand along Broad Street and Hick Street. The streets will be closed at 9:30 a.m.
-When the procession passes you, you can join in and proceed to the middle school gymnasium or you can enter the middle school before 10 a.m.
-Upon entering the middle school gymnasium, seating will be available for the public in the chairs on the basketball court.
-This is a rain or shine event.
This event is a collaborative effort between the Anderson County Mayor’s Office, the Anderson County Commission, Anderson County Schools, the city of Clinton, the city of Oak Ridge Mayor, City Manager and staff, Oak Ridge Schools Director Bruce Borchers and staff, the Mayme Charmichael School Organization, Inc., the Oak Ridge/Anderson County NAACP and the Green McAdoo Cultural Center. Adventure Anderson is handling the publicity for the event.

(More from the Facebook event description) Everyone is invited to the Clinton 12 Commemorative Walk on August 26, 2019 at 10 a.m. The purpose of the Clinton 12 Commemorative Walk is to honor the twelve high school students who braved threats of violence to attend Clinton High School, making it the first desegregated public high school in the South, to recognize a community and its leaders that came together to rectify an injustice, to educate the future generations of the struggles of the past in order to encourage a culture of acceptance and celebration of our differences.
On August 26, 2019, Clinton Middle School students and Clinton Elementary School students will line West Board Street and North Hicks Street and the Clinton 12 and dignitaries will walk down from Green McAdoo Cultural Center, former Green McAdoo School to Clinton Middle School, the former Clinton High School. Following the walk, there will be a program in the middle school’s gymnasium where the Clinton 12 will be recognized and a proclamation will be presented from the State of Tennessee and a joint proclamation will be presented by Anderson County Commission, the City of Clinton and the City of Oak Ridge.
Honored Guests will include the remaining eight members of the Clinton 12, family representatives of the Clinton 12 that are deceased, United States Senator Lamar Alexander and Tennessee Lt, Governor Randy McNally.

To find out more about the genesis of how this idea came to fruition, check out a really well-written article in the Wednesday, August 7th edition of the Clinton Courier News.

Jim Harris has been WYSH's News & Sports Director since 2000. In addition to reporting local news, he is the play-by-play voice for Clinton High School football, boys' and girls' basketball and baseball. Catch Jim live weekdays beginning at 6:20 am for live local news, sports, weather and traffic plus the Community Bulletin Board, shenanigans with Ron Meredith and more on the Country Club Morning Show on WYSH & WQLA. Jim lives in Clinton with his wife Kelly and daughter Carolina, his mother-in-law and cats Lucius and Oliver.
Previous AC Budget Committee meeting to air on ACTV, stream on website
Next Budget Committee recommends 10-cent tax increase; 205 Main sold at auction