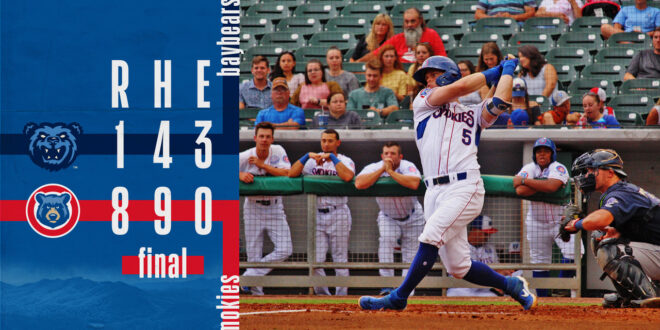 Smokies pick up needed win in opener vs. Mobile

(Game summary courtesy of the Tennessee Smokies) The Tennessee Smokies (41-49, 8-13) cruised to a much needed 8-1 victory over the visiting Mobile BayBears (36-52, 9-11) at Smokies Stadium on Thursday night. In a game that featured a combined six double plays and an hour rain delay, ultimately a pair of runs in the first two frames lifted the Smokies to an early lead over Mobile.

Roberto Caro entered the in a drought going 1-for-23 over his last six games, but he wasted no time snapping that stretch by singling to lead off the bottom of the first. Vimael Machin delivered the first run with an RBI-single to score Caro. A fielder’s choice off the bat of Jhonny Pereda added the second run of the frame to score Nico Hoerner.

In the second, a Charcer Burks leadoff walk set up Christian Donahue who doubled in Burks to extend the Smokies advantage. A pair of strikeouts brought the Cubs No. 1 prospect Hoerner up to the plate with a runner in scoring position. Hoerner singled to right field off RHP Zack Kelly (L,1-5) which tacked on the fourth run for the Smokies.

Mobile’s offense got on the board in the top of the third inning. Jahmai Jones lined a ball into centerfield with two outs to score Brandon Marsh moving the score to 4-1 Smokies.

In his Smokies and Double-A debut, RHP Erick Leal (W, 1-0) hurled five innings, allowing one run while striking out six on his way to the win.

After an hour-long rain delay in the fifth, the sides resumed play with both starters exiting the game. The Smokies grabbed a run in the sixth off a Charcer Burks RBI-single to score Zach Davis and extend the Smokies lead to 5-1.

The game was blown open in the seventh. Two walks and a single loaded the bases for Zach Davis in his Double-A debut. A sharply hit ball over the second baseman Jones scored two, Davis’ first Double-A knock.

The two sides do it again on Friday night at 7:00 pm EDT from Smokies Stadium. RHP Jeffery Passantino (1-0, 3.60) gets his first start at Smokies Stadium while Mobile turns to RHP Andrew Wantz (0-1, 4.07). Fans should be sure to stick around after the game for a fireworks extravaganza show.

Jim Harris has been WYSH's News & Sports Director since 2000. In addition to reporting local news, he is the play-by-play voice for Clinton High School football, boys' and girls' basketball and baseball. Catch Jim live weekdays beginning at 6:20 am for live local news, sports, weather and traffic plus the Community Bulletin Board, shenanigans with Ron Meredith and more on the Country Club Morning Show on WYSH & WQLA. Jim lives in Clinton with his wife Kelly and daughter Carolina, his mother-in-law and cats Lucius and Oliver.
Previous GOTS: 18-year-old Ankrum makes history with first series win
Next AC Library Board meeting in Clinton Thursday 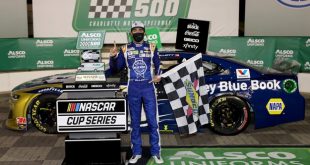