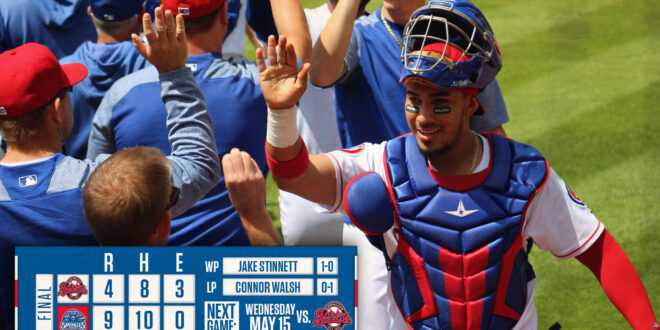 (Game summary submitted by the Tennessee Smokies) The Tennessee Smokies (18-20) defeated the Birmingham Barons (15-23) 9-4 Tuesday afternoon at Smokies Stadium. The Smokies sent a season high 11 men to the plate and scored a season best seven runs in the bottom of the seventh inning to blow the game open. Roberto Caro and Charcer Burks both reached base four times in the win.

Luis Vazquez reached on an infield single to Barons shortstop Laz Rivera, he advanced to second on Rivera’s throwing error. Connor Myers’ bunt-single moved Vazquez to third, and he scored the game’s first run on P.J. Higgins’ RBI-double. With two-outs and the bases loaded in the fifth, Luis Robert lined a two-run single into left field to give Birmingham a 2-1 lead.

The Smokies regained the lead in the bottom of the seventh. Myers drew a leadoff walk and scored from first on Caro’s RBI-double to give the Smokies a 3-2 lead. Caro moved to third on a wild pitch and scored on Higgins’ RBI-single. Jared Young reached on an error and Pereda walked to load the bases. Burks came up and lined a two-run single to left field, an error from left fielder Luis Basabe allowed Pereda to score from first and pushed Burks to third. Hodges added an RBI-single and Myers hit a sacrifice fly in the inning.

RHP Thomas Hatch allowed two runs and struck out three over five innings, but did not factor in the decision. RHP Jake Stinnett (W, 1-0) earned the win in relief. He allowed a hit and two walks over two scoreless innings. RHP Connor Walsh (L, 0-1) suffered the loss. He faced six batters, all six reached and scored.

Jim Harris has been WYSH's News & Sports Director since 2000. In addition to reporting local news, he is the play-by-play voice for Clinton High School football, boys' and girls' basketball and baseball. Catch Jim live weekdays beginning at 6:20 am for live local news, sports, weather and traffic plus the Community Bulletin Board, shenanigans with Ron Meredith and more on the Country Club Morning Show on WYSH & WQLA. Jim lives in Clinton with his wife Kelly and daughter Carolina, his mother-in-law and cats Lucius and Oliver.
Previous Bert Richmond, age 75 of Knoxville
Next State Parks to celebrate National Trails Day