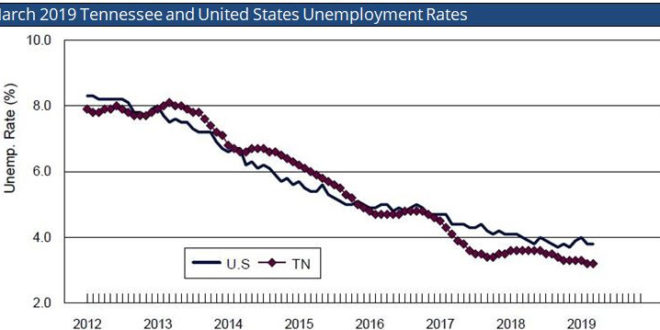 Nationally, unemployment also remains unchanged. The March seasonally adjusted rate for the United States is once again 3.8 percent. That is a 0.2 of a percentage point lower than the rate in March 2018.
Total nonfarm employment across Tennessee is down 3,000 jobs when compared to February.
Tennessee did experience an increase in the mining/logging/construction sector in March which gained 1,500 jobs. The financial activities sector also added 800 jobs.
The trade/transportation/utilities sector had a loss of 2,600 positions for the month, while the manufacturing sector experienced a decrease of 1,200 jobs.
Over the last 12 months, Tennessee has seen an overall gain of 47,800 new nonfarm jobs across the state.
The statewide and national unemployment rates are seasonally adjusted to eliminate the influences of weather, holidays, the opening and closing of schools, and other recurring seasonal events from an economic time series.
A complete analysis of the March 2019 unemployment rate for the state of Tennessee can be found here.

Jim Harris has been WYSH's News & Sports Director since 2000. In addition to reporting local news, he is the play-by-play voice for Clinton High School football, boys' and girls' basketball and baseball. Catch Jim live weekdays beginning at 6:20 am for live local news, sports, weather and traffic plus the Community Bulletin Board, shenanigans with Ron Meredith and more on the Country Club Morning Show on WYSH & WQLA. Jim lives in Clinton with his wife Kelly and daughter Carolina, his mother-in-law and cats Lucius and Oliver.
Previous Roane Anti-Drug Coalition announces Drug Drop-off points
Next Thursday high school sports scores