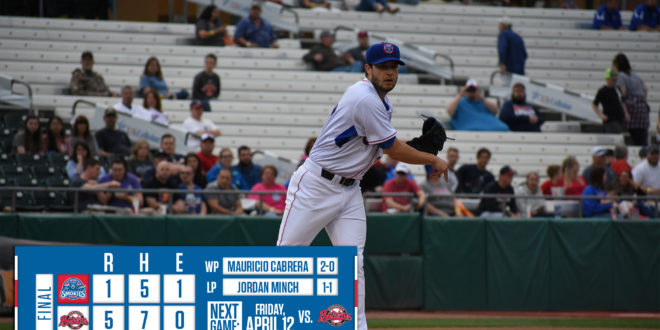 Jared Young’s solo home run in the sixth inning ended a pitching duel and got the scoring started.

In the bottom of the eighth Joel Booker tied the game with a run-scoring single to bring Laz Rivera home. With the bases loaded later in the innning, Ti’Quan Forbes delievered for the Barons with a three run triple to clear the bases, giving the Birmingham their first lead in the series, 4-1.

The Barons added on another run courtsey of a Gavin Sheets’ RBI to bring Forbes home giving the Barons a 5-1 lead.

Mauricio Cabrera (W, 2-0) was credited with a win after 1.1 innings of work and a strikeout. For the Smokies, Jordan Minch (L, 1-1) took the loss from his 2/3 inning performance where he surrended five runs on four hits.

Jim Harris has been WYSH's News & Sports Director since 2000. In addition to reporting local news, he is the play-by-play voice for Clinton High School football, boys' and girls' basketball and baseball. Catch Jim live weekdays beginning at 6:20 am for live local news, sports, weather and traffic plus the Community Bulletin Board, shenanigans with Ron Meredith and more on the Country Club Morning Show on WYSH & WQLA. Jim lives in Clinton with his wife Kelly and daughter Carolina, his mother-in-law and cats Lucius and Oliver.
Previous HS baseball, softball scores; NASCAR runs under lights twice this weekend
Next GSMNP: Motorcycle wreck kills one, injures another