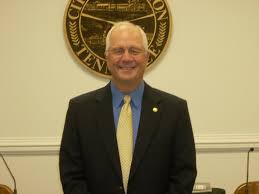 JUST IN: Chancellor rules for Stamey in election challenge

Young’s lawsuit, filed in November, alleged that because Stamey, who is employed as the Athletic Director for the Clinton City school system, was ineligible to serve on the Council because the city charter stipulates that city employees cannot serve on the City Council due to potential conflicts of interest. Stamey has been on the City Council since 2010 and was hired by the schools as an “at-will” employee in 2017.

Stamey argued that because the city school system approves and manages its own budget, without the need for Council approval, that he is in fact, not an employee of the city of Clinton.

After hearing oral arguments from both sides and reviewing the material submitted by the attorneys in the case, Chancellor Cantrell ruled that, based upon statutes and case law that while the city’s legislative body may have established the school system, it is run autonomously and separately from the rest of the city government–complete with its own legislative body (the Board of Education) and director.

With that, Chancellor Cantrell ruled in favor of Stamey, dismissing Young’s claim against not only the Councilman, but also his claim against the Anderson County Election Commission, as the summary judgement granted this morning covered all aspects of the complaint. The suit had also asked the court to issue an order to permanently prevent the Election Commission from approving any ballot for the city of Clinton that includes municipal employees.

After the hearing, Stamey expressed his gratitude to his attorney and praised the thoroughness of the Chancellor’s ruling, and said that he was “pleased” with the ruling.

It remains to be seen if Young will appeal the ruling, but we will keep you posted as developments warrant.

Jim Harris has been WYSH's News & Sports Director since 2000. In addition to reporting local news, he is the play-by-play voice for Clinton High School football, boys' and girls' basketball and baseball. Catch Jim live weekdays beginning at 6:20 am for live local news, sports, weather and traffic plus the Community Bulletin Board, shenanigans with Ron Meredith and more on the Country Club Morning Show on WYSH & WQLA. Jim lives in Clinton with his wife Kelly and daughter Carolina, his mother-in-law and cats Lucius and Oliver.
Previous Hot Dog Supper & Auction Friday in Briceville
Next Baseball, softball scores