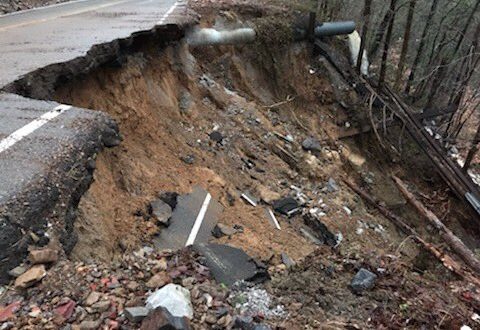 One lane of slide-damaged Highway 116 back open

One lane of Highway 116 in Briceville is back open today, just a day after a landslide closed the roadway between Indian Fork Lane and Bunch Cemetery.

Parts of the area received as much as four inches of rain on Wednesday night, causing widespread flooding and other issues across Anderson County. In the landslide on 116, the hill along the side, and under, the roadway gave way, causing a large section of the road to collapse. It is not clear exactly how long it will take to fully repair the slide damage, but one lane is back open at this hour.

A landslide also occurred on Hillcrest Street–Dragon Drive–in front of Clinton High School as a result of this week’s torrential rainfall.

Jim Harris has been WYSH's News & Sports Director since 2000. In addition to reporting local news, he is the play-by-play voice for Clinton High School football, boys' and girls' basketball and baseball. Catch Jim live weekdays beginning at 6:30 am for live local news, sports, weather and traffic plus the Community Bulletin Board, shenanigans with Ron Meredith and more on the Country Club Morning Show on WYSH. Jim lives in Clinton with his wife Kelly and daughter Carolina, and cats Oliver, Bow and Libby.
Previous Union man pleads guilty in 2017 shooting
Next Dine & Donate February 11th