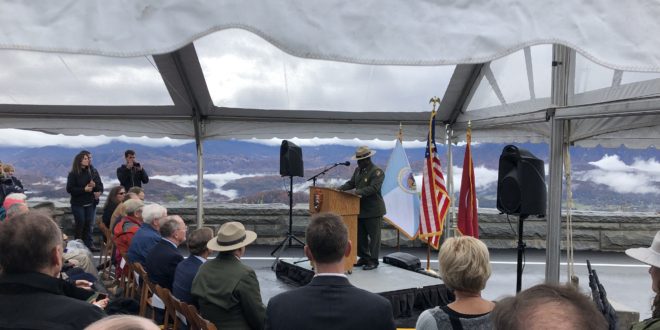 (GSMNP release) Great Smoky Mountains National Park officials were joined by Senator Lamar Alexander, Congressman John J. Duncan, Jr, Congressman Phil Roe, Governor Bill Haslam, and NPS Southeast Regional Director Bob Vogel to dedicate the long-awaited section of the Foothills Parkway between Walland and Wears Valley, TN before the public opening on Saturday, November 10. The public will be able to experience this new section of roadway for the first time since construction began in 1966, including the 1.65-mile section known as the ‘Missing Link’ which is now connected by a series of nine bridges.

“We are proud to dedicate this roadway to the people who dreamed it, engineered it, built it, and supported it,” said Superintendent Cassius Cash. “Each person gathered here today has been a part of creating a legacy parkway that the public will enjoy for generations to come.”

The celebration was attended by over 200 former and current employees of the National Park Service, Eastern Federal Lands Highway Division of the Federal Highway Administration, Tennessee Department of Transportation, contractors, and community leaders who participated in the construction of the parkway over the last several decades. Senator Alexander, Congressman Duncan, Congressman Roe, and Governor Haslam joined Superintendent Cash to cut the ribbon signifying the grand opening of the Foothills Parkway.  The roadway officially opens to the public on Saturday, November 10 for motorists and cyclists to enjoy.

“If you want the best view of the highest mountains in the eastern United States, you’ll drive the Foothills Parkway,” said Senator Lamar Alexander. “The scene is so magnificent that it surprises even those of us who have grown up admiring the Smokies. It has taken nearly 75 years to complete, but it is so picturesque that it is worth the 75-year wait.”

The Foothills Parkway now consists of two finished sections at either end of the 72-mile corridor. The western section now extends 33 continuous miles from Chilhowee to Wears Valley, offering a new recreational experience for motorists and cyclists. The eastern section, completed in 1968, extends 6 miles from Cosby to Interstate 40 presenting breathtaking views of Mt. Cammerer.

For more information about exploring scenic drives in the park, please visit the park’s website at https://www.nps.gov/grsm/planyourvisit/autotouring.htm.

Jim Harris has been WYSH's News & Sports Director since 2000. In addition to reporting local news, he is the play-by-play voice for Clinton High School football, boys' and girls' basketball and baseball. Catch Jim live weekdays beginning at 6:20 am for live local news, sports, weather and traffic plus the Community Bulletin Board, shenanigans with Ron Meredith and more on the Country Club Morning Show on WYSH & WQLA. Jim lives in Clinton with his wife Kelly and daughter Carolina, his mother-in-law and cats Lucius and Oliver.
Previous HSFB playoffs: Round 2 scores, Quarterfinal schedules
Next Tracy Lynn White Sisson, age 48 of Knoxville