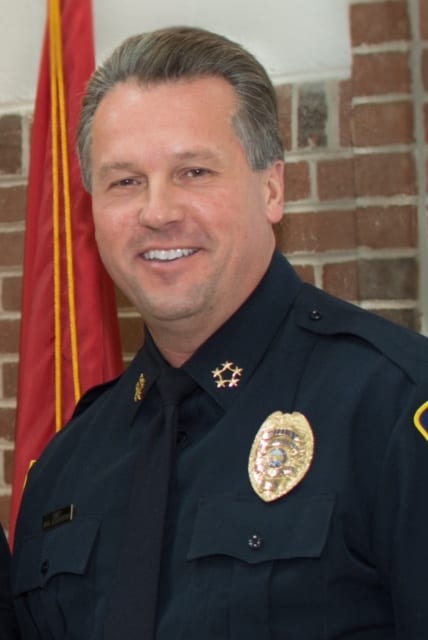 Clinton Police Chief Rick Scarbrough has announced that he is leaving the department to accept the position of Executive Director of the UT Law Enforcement Innovation Center.

The following is a press release from the city. WYSH will follow up and you will hear from Chief Scarbrough on Wednesday.

It is with mixed emotions that City Manager Roger Houck is announcing the departure of long time Chief of Police, Rick Scarbrough. Scarbrough has accepted a position as the Executive Director of the University of Tennessee’s Law Enforcement Innovation Center. “When I say mixed emotions, I’m excited for the opportunity my friend has, but as City Manager I obviously hate to lose him as our Police Chief.” Said Houck

Scarbrough has 29 years of law enforcement experience, 6 of those with the Anderson County Sheriff’s Department and 23 with Clinton, serving as Clinton’s Chief the last 16. A 1999 graduate of the FBI National Academy, Scarbrough also has Bachelors and Master’s Degrees in Organizational Management from Tusculum College. He completed the Senior Leadership Seminar by the College of Policing in Manchester England. He is currently the 1st Vice President of the Tennessee Association of Chiefs of Police. He also serves on the Board of Directors of the International Association of Chiefs of Police, as well as their Finance Review Committee.

Under Scarbrough’s leadership the department won the 2005 Governor’s Highway Safety Office (GHSO) Statewide Award for Top Alcohol Prevention Program, 2008 GHSO Overall Traffic Safety for agency less than 25 officers, 2010 GHSO 2nd Place Overall Traffic Safety for agency less than 25 officers, 2014 University of Tennessee MTAS Excellence in Police Services Award for Clinton Police Department, 2014 TACP Police Chief of the Year and in 2017 the Clinton Police Department received its first ever state accreditation. “Our success is a tribute to the professionalism and ability of our officers. We have been fortunate to retain quality individuals and that has led to the continuity we’ve enjoyed. Combine that with our great community and it makes my job much easier! It has been my honor to serve my hometown and contribute what I could to maintain the quality of life we enjoy here. I’d like to also add that I’ve enjoyed the support of some great councils in the past and this council is no different. Roger Houck has and is a class act as well. I’ve been fortunate!” Said Chief Scarbrough

In addition to the police department, Scarbrough is responsible for the Building and codes department as well as E911 communications, with a total staff of 45 and a budget of approximately $4 million.

“Rick and I have discussed the possibility he may be leaving and we both feel that Assistant Chief Vaughn Becker is ready for the opportunity. We have had a succession plan in place for some time.”said Houck.  Becker will become the interim Chief effective August 1st.

Jim Harris has been WYSH's News & Sports Director since 2000. In addition to reporting local news, he is the play-by-play voice for Clinton High School football, boys' and girls' basketball and baseball. Catch Jim live weekdays beginning at 6:20 am for live local news, sports, weather and traffic plus the Community Bulletin Board, shenanigans with Ron Meredith and more on the Country Club Morning Show on WYSH & WQLA. Jim lives in Clinton with his wife Kelly and daughter Carolina, his mother-in-law and cats Lucius and Oliver.
Previous Bonnie Beatrice Foust Byrge, age 89 of Andersonville
Next Rhonda Glandon Woodfin, of Andersonville