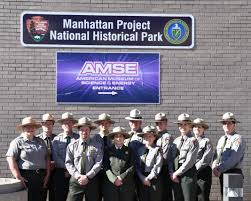 According to our partners at Oak Ridge Today, the National Park Service will move its visitor center and offices in Oak Ridge to the Children’s Museum in October.

The National Park Service has a visitor center and offices in Oak Ridge as part of the Manhattan Project National Historical Park, the three-site park that was established in November 2015.

The visitor center and offices are now located at the American Museum of Science and Energy, or AMSE, on South Tulane Avenue. But that museum is closing as part of a land transfer related to the Main Street Oak Ridge development.

The park’s new visitor center will be inside the Children’s Museum of Oak Ridge. The Children’s Museum is located in a former Manhattan Project-era elementary school, and it operates in 54,000 square feet with exhibits, classes, and programs for all ages, the press release said.

The Manhattan Project National Historical Park is administered jointly by the U.S. Department of Energy and the National Park Service to preserve parts of three World War II sites where the United States developed the first atomic weapons. The park commemorates the history of the people, science, and events that led to creation of the atomic bomb in the top-secret Manhattan Project during World War II, and it explores the associated moral and ethical responsibilities that are still relevant today, the press release said. Besides Oak Ridge, the sites include Hanford, Washington, and Los Alamos, New Mexico.

The U.S. Department of Energy’s public education and outreach missions currently housed at AMSE will be moving to new space in the former Sears store at what is now Main Street Oak Ridge, the 58-acre project to redevelop the former Oak Ridge Mall.

The details of the move of the DOE public outreach and education missions from AMSE to Main Street Oak Ridge are still being worked out, but DOE has to be out of the AMSE building by the end of December.

Jim Harris has been WYSH's News & Sports Director since 2000. In addition to reporting local news, he is the play-by-play voice for Clinton High School football, boys' and girls' basketball and baseball. Catch Jim live weekdays beginning at 6:20 am for live local news, sports, weather and traffic plus the Community Bulletin Board, shenanigans with Ron Meredith and more on the Country Club Morning Show on WYSH & WQLA. Jim lives in Clinton with his wife Kelly and daughter Carolina, his mother-in-law and cats Lucius and Oliver.
Previous MPNHP hosting walk through Jackson Square
Next Fire on the Water Saturday