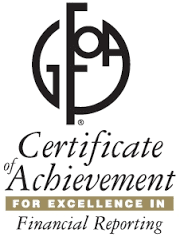 The city of Clinton and its Finance Director have received prestigious national recognition.

The city has been awarded the Certificate of Achievement for Excellence in Financial Reporting by the Government Finance Officers Association of the United States and Canada (GFOA) for its comprehensive annual financial report (CAFR), and Finance Director Gail Cook was recognized with an Award of Financial Reporting Achievement for preparing the report. The certificate, according to the GFOA, is the highest form of recognition in the area of governmental accounting and financial reporting, and its attainment “represents a significant accomplishment” by a government and its management.

The press release states that the CAFR “has been judged by an impartial panel to meet the high standards of the program, which includes demonstrating a ‘spirit of full disclosure’ to clearly communicate its financial story.”

City Manager Roger Houck commended Cook for her hard work, saying that when he was first named city manager, he visited other municipalities, most told him to hire a good finance director because that will make his job much easier, which he says he has found to be true.

Jim Harris has been WYSH's News & Sports Director since 2000. In addition to reporting local news, he is the play-by-play voice for Clinton High School football, boys' and girls' basketball and baseball. Catch Jim live weekdays beginning at 6:20 am for live local news, sports, weather and traffic plus the Community Bulletin Board, shenanigans with Ron Meredith and more on the Country Club Morning Show on WYSH & WQLA. Jim lives in Clinton with his wife Kelly and daughter Carolina, his mother-in-law and cats Lucius and Oliver.
Previous Clinton Council passes budget, authorizes CUB loan
Next USAF Band of Mid-America’s Airlifter Brass coming to Oak Ridge