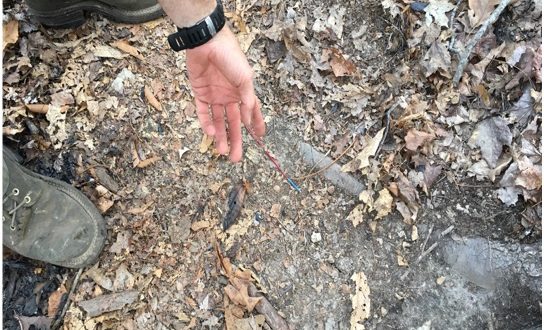 Investigators point to evidence that fireworks may have caused the brush fire in Oak Ridge on Saturday March 25th. (DOE/OR)

Reward offered for info on brush fire on DOE land

Investigators in Oak Ridge suspect that Saturday’s brush fire on Department of Energy land was caused by fireworks and are now offering a reward for information about the fire.

City fire crews were called to an area near the intersection of Wisconsin Avenue and Whippoorwill Drive at around 12:30 pm Saturday on a call of a possible brush fire, but when they arrived, were not able to immediately locate the fire, although smoke was in the area. A hiker came down a trail and told firefighters that the blaze was actually a few hundred yards off the trail in a wooded area.

When crews reached the fire site by foot, they found a five-acre fire that was growing, thanks in part to Saturday’s breezy conditions. The State Division of Forestry was called to help fight the fire and responded with manpower and bulldozers to cut fire lines around the blaze. Oak Ridge firefighters also called in representatives from the Oak Ridge National Laboratory’s Forestry Division since the fire was burning on federal land.

The blaze burned about 20 acres according to a joint release from the DOE and the city, before it was contained at around 7 pm.

The release states that “Due to the proximity of the fire to residential housing in the area, a $500 reward is being offered by the City of Oak Ridge for information leading to resolution of the incident.” If you have any information on Saturday’s fire, contact Oak Ridge Police at 865-425-4399.

No structures were damaged and no injuries were reported.

Jim Harris has been WYSH's News & Sports Director since 2000. In addition to reporting local news, he is the play-by-play voice for Clinton High School football, boys' and girls' basketball and baseball. Catch Jim live weekdays beginning at 6:20 am for live local news, sports, weather and traffic plus the Community Bulletin Board, shenanigans with Ron Meredith and more on the Country Club Morning Show on WYSH & WQLA. Jim lives in Clinton with his wife Kelly and daughter Carolina, his mother-in-law and cats Lucius and Oliver.
Previous Doris Mae Earl, age 61 of Clinton
Next Fun events at Main Street Baptist in Rocky Top