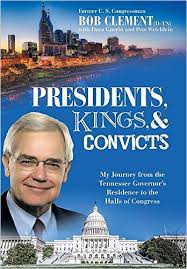 On Monday, April 10, 5:00 PM to 7:00 PM at the Green McAdoo Cultural Center, 101 School Street in Clinton, Tennessee, former U.S. Congressman Bob Clement will read and sign his new memoir, “Presidents, Kings, and Convicts: My Journey from the Tennessee Governor’s Residence to the Halls of Congress.”

Congressman Clement’s book describes behind-the-scenes accounts of some of his most memorable events beginning with his childhood-growing up in the Tennessee Governor’s mansion, to becoming a TVA director, military officer, college president, successful businessman and a member of Congress for eight terms.

Here is a promotional video talking about the book and some of the amazing stories Congressman Clement shares.

It features a chapter on the desegregation of the South, specifically the role his father, Frank G. Clement, played in helping to integrate Clinton High School—the first public high school in the South to desegregate in 1956—and fighting against the racial intolerance of the day. Governor Frank Clement was instrumental in restoring order after the bombing of the school in 1958, and helping facilitate Clinton’s unique place in the history of the American Civil Rights Movement.

The book also examines the current hyper-partisanship in politics today and offers solutions for fixing the country; Tennessee politics and behind-the-scenes stories growing up as the son of Governor Frank G. Clement; entertaining stories about Music City USA; inside stories about local, national and international politicians and events; what makes great leaders; and how to restore public service and politics as careers worth pursuing. In addition, at the end of each chapter are “Clement’s Contemplations,” humorous musings about politics and life.”

For more information on the Green McAdoo Cultural Center, contact: Tim Thompson, 865-216-7850 ([email protected]). For other book signing events, or to book future events, email: [email protected], or visit Clement’s Facebook page. The book may be purchased on Archway Publishing’s website, Amazon, Barnes& Noble, Parnassus Books, and other bookstores across the country, and on Clement’s web site: www.presidentskingsconvicts.com.

Jim Harris has been WYSH's News & Sports Director since 2000. In addition to reporting local news, he is the play-by-play voice for Clinton High School football, boys' and girls' basketball and baseball. Catch Jim live weekdays beginning at 6:20 am for live local news, sports, weather and traffic plus the Community Bulletin Board, shenanigans with Ron Meredith and more on the Country Club Morning Show on WYSH & WQLA. Jim lives in Clinton with his wife Kelly and daughter Carolina, his mother-in-law and cats Lucius and Oliver.
Previous Man arrested for ‘huffing’ in park
Next Jeanette Shepard, LaFollette