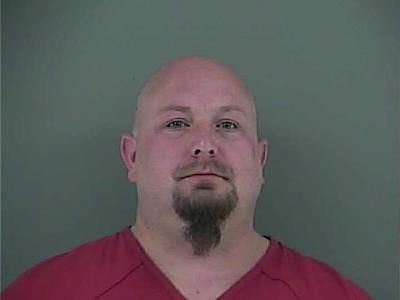 According to the Tennessee Highway Patrol, a DUI suspect arrested last month in Anderson County was wearing a chastity belt at the time of his arrest.

The THP reports that 35-year-old Curtis Scott Eidam of Oak Ridge entered a sobriety checkpoint on May 14th on State Highway 62. Officers detected the smell of alcohol coming from the vehicle and from Eidam himself. He admitted to officers that he had consumed four or five shots of liquor in the hours before the encounter and also admitted that he had a pistol in the center console of the vehicle.

Eidam and his female passenger Rebecka Alexander, who was described as also being visibly intoxicated, were removed from the vehicle, which is when officers noted that Eidam was wearing a “white skirt, white leggings with pink stripes and black high heels.”  Troopers also stated he had a ribbon tied in his goatee.  He failed a field sobriety test and was taken into custody, at which time he told officers that he would need a key to unlock the chastity belt he was wearing. He said one key was on his keychain and the other was being worn as a necklace by Alexander. The key was provided to jailers when he arrived at the Anderson County Detention facility.

Eidam was charged with DUI and for possessing a weapon while intoxicated, booked and released a few hours after his arrest on bonds totaling $6500.

Jim Harris has been WYSH's News & Sports Director since 2000. In addition to reporting local news, he is the play-by-play voice for Clinton High School football, boys' and girls' basketball and baseball. Catch Jim live weekdays beginning at 6:20 am for live local news, sports, weather and traffic plus the Community Bulletin Board, shenanigans with Ron Meredith and more on the Country Club Morning Show on WYSH & WQLA. Jim lives in Clinton with his wife Kelly and daughter Carolina, his mother-in-law and cats Lucius and Oliver.
Previous ORT: AC Democrat drops out of primary
Next Oak Ridge, Lafollette receive THDA funds